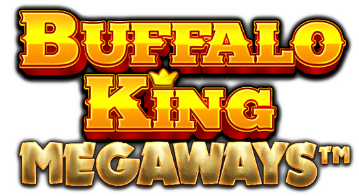 The vast prairies of North America open up in the newest videoslot from Pragmatic Play, Buffalo King Megaways. The new slot takes you in the middle of the wilderness, alongside buffalos, eagles, and wolves, featuring the same graphic elements as the original title, Buffalo King. The dangers of the wildlife are already known to man, but are there any treasures hidden in the shadows of them tall cliffs? As an explorer of casino games, I took the mission of finding out if this new title from Pragmatic Play comes with more than a nice design and a Megaways engine.

Buffalo King Megaways – what you need to know

The Buffalo King Megaways slot doesn’t bring a lot of new things to the table, as far as the grid format goes. Similar to other titles in their offer, such as Madame Destiny Megaways and Christmas Carol Megaways, the new only online slot features a Megaways format with six reels and eight rows that can hold symbols of different sizes. However, the game does add to the excitement with its 200704 ways to win and its free spins round with wild multipliers.

Although the backdrop with tall cliffs and dry prairies looks exceptional, as the provider is known for its graphic elements, Buffalo King Megaways isn’t very different from the original slot. The buffalo, eagle, wolf, cougar, and moose, together with the Wild that looks like a cliff and the Coin Bonus symbol, land on the reels with prizes of up to 20x the bet. However, the music in the new videoslot is a bit more alert, keeping its let’s-have-an-adventure kind of vibe alive.

The Buffalo King Megaways slot features a classic Megaways format with six reels and eight rows, plus an additional row (the ninth, if you want) that spins individually. The row on top of the grid holds four symbols, while the traditional grid can carry up to eight. The volatility is rated as high, while the RTP is, most of the time, 96.52%. However, depending on your choices, it may be 96.49% or 96.50%. You’ll see in the sections below when these values apply,

The symbols pay from left to right, starting with the first one on the left, for three, four, five, or six on a payline. Naturally, the Buffalo King awards the top prize of 20x the stake for six on the screen, while the eagle and the cougar bring awards of 6.25x and 3.75x the bet. The wolf and the moose come with prizes of 1.5x. Apparently, in the buffalo’s kingdom, the rules of the wilderness don’t apply as in real life. Otherwise, how could a wolf have the same value as a moose?

Anyway, the slot also features low-paying symbols, which come with small amounts of 1x, 0.75x, and 0.6x the bet for six on a payline.

I know the tumbling mode is often considered a feature, but, in this case, it’s linked to the gameplay, so I think its place is here. In short, the tumble feature takes care of bringing fresh symbols on the screen. After a win, the symbols that were part of the combination vanish from the screen. The symbols that remain on the grid fall to the bottom of the screen, while new ones glide from above. In other words, each ending (of a win) is a new beginning (of fresh wins).

Buffalo King Megaways works perfectly on every device of your choosing. From tablets to mobile devices or PCs, this videoslot adapts to your screen, fitting seamlessly to your screen.

To be honest, the Buffalo King Megaways slot didn’t surprise me with its features. The provider kept it pretty safe and went for an updated version of free spins, compared to the original title, and two bet options.

You can activate the free spins in Buffalo King Megaways with at least four Coin symbols on the grid. Depending on the number of Coins that triggered the round, the Buffalo can award up to 22 free games:

The prizes awarded by Coin symbols are also bigger if you land more on the screen. Four Coins bring a prize 5x the stake, while for five, the game offers a quite decent amount of 10x the bet. The biggest win of 100x the bet can be reached with six Coins on the reels.

Similar to Buffalo King, the Wilds that hit in the free spins feature come with multipliers of 2x, 3x, or 5x. Now, these multipliers don’t apply to the win of the combination that contains a Wild, as one might imagine but to the entire win of the tumble. So, all multipliers are added up and applied to all wins in a tumble. Pretty sweet, right?

There is also the chance to add more free spins if you land at least three Coins during the free spins mode. Moreover, you aren’t restrained to a specific number of retriggers. Buffalo King Megaways doesn’t have a limit to the number of times you can reactivate it.

You can play Buffalo King Megaways with one of the two bet options available. The Bet Multiplier 20x is the default option available when you open the game. It triggers normal gameplay, giving you the possibility of activating the buy free spins round. If, however, you are eager to get to the best part of the game, you can enable the Bet Multiplier 25x. It adds more Coin symbols on the reels, doubling your chances of hitting the bonus round. The Bet Multiplier 25x also comes with a 96.49% RTP. Sadly, the Bet multiplier 25x doesn’t allow you to enable the buy free spins round. So, you can either play the standard game and buy the free spins, or you can double your chances of hitting the bonus naturally. Nothing is perfect in life.

The Buffalo knows you are looking for the greatest treasure in the Buffalo King Megaways slot, and he’s determined to help you get there. That’s why this videoslot comes with a buy free spins option that triggers the round immediately for 100x the stake. The Bet Multiplier 25x also comes with a 96.50% RTP. The game will randomly land four, five, or six Coins on the screen, awarding 10, 17, or 22 free games.

If you manage to land the biggest prize of 5,000x the bet in the free spins, the game pays out, but the remaining free spins (if any) are forfeited.

Buffalo King Megaways provides satisfactory gameplay, with two bet features and Wild multipliers. Although the number of ways to win is higher and the top award is quite decent, I still think they could’ve done more. Pragmatic Play took a hit title and turned it into a Megaways version, keeping the key elements and spicing up the gameplay a bit. They’ve done a good job, no doubts here, but my opinion is that they could’ve made this title even more exciting, with more features or bigger payouts.