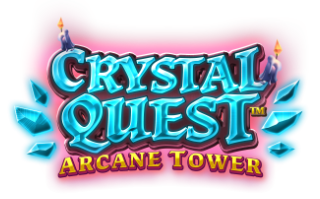 In this installment, we find our hero, Gemma making her second appearance in the Crystal Quest series, while she sets out on yet another exciting journey. However, this time her adventures do not take her through the deep jungle. This all-new adventure takes her on an epic journey to the Arcane Tower where rumor has it there are untold riches to be found, but only if she can defeat the Sorcerer of the tower.

Arcane Tower has similar mechanics as to what was found in Deep Jungle, so one can expect much the same in the way of gameplay. There are however plenty of new features Thunderkick has added to the game that will help keep players interested, such as the Rolling Reels, Infinite Multipliers, Bonus Game, and Linked Reels.

This is a high variance online slot game, with a maximum win of 15,000x the stake which translates into some potentially high-wins for players.

Crystal Quest: Arcane Tower – what you need to know

Crystal Quest: Arcane Tower definitely has plenty in the way of positive aspects going for it, and these far outweigh any negative aspects, so let’s take a closer look.

Crystal Quest: Arcane Tower is a fantasy-themed slot, featuring a 6-reel, 4-rows layout with 4096 paylines. As is the case with Deep Jungle, it too is also a superbly well designed and attractive looking game.

The game features some excellent animations as well as fantastic looking graphics, which are all high-definition as well as been bright, cheerful, and colorful. The background is made up of trees, old books, and burning candles, with the powerful soundtrack completing the fantasy atmosphere. Thunderkick has once more gone with the cartoon-style design again, and it works well complimenting the theme nicely.

Thunderkick has done a fantastic job on the symbols, these are represented by gems, with the lower paying symbols been blue, yellow, pink, and orange gems. The higher paying symbols are represented by three mid paying crystals, the warrior, and the sorcerer. The highest paying symbol is the Sorcerer, and you can win 20x your bet if you manage to land 6-of-a-kind. The “W” symbol is the wild, and the treasure chest is the scatter symbol. Collecting 3 of them unlocks the free spins round

As is the case with most video slots, the base game can be a bit of a drag, especially while you wait for the free spins feature to kick in. The great thing with Crystal Quest: Arcane Tower is that when it does kick in, there are 5 bonus features to spice up the game and excitement. The multipliers and avalanches are the keys to big wins, especially with the multipliers that can increase infinitely.

Crystal Quest: Arcane Towers has quite a lot to offer in the way of features, starting with the Free Spins. To trigger the bonus game you will need to land 3 treasure chest scatter symbols in one spin. You will be rewarded 12 Free Spins. What’s more, In this mode the multiplier does not reset. While in the bonus round, if you manage to land 2 or more additional scatters you will be rewarded with 3 extra free spins. And for every additional scatter landed after that 2 extra free spins will be added, with there been no limit as to how many times the free spins can be re-triggered.

This happens when you fail to land a winning combination during the bonus game, then any Wild symbols that have landed will explode and remove symbols horizontally and vertically. These symbols that have exploded will then be replaced with new symbols, which trigger an avalanche feature and increase the current multiplier.

This feature, when triggered, allows all 6 reels can become identical to one another paving the way for huge matched wins. One thing to take note of is that this feature can’t be triggered while the Avalanche feature is active.

There’s a lot to like about Crystal Quest: Arcane Towers, especially if you enjoyed Deep Jungle. However, in all truth, it is a lot like Deep Jungle, so it turns out to be more of the same. This is not entirely a bad thing, as the slot does manage to deliver exciting gameplay as well as the potential for huge winnings.

Hopefully, when Thunderkick releases their next Crystal Quest series slot, they will be more innovative with their visuals as well as the game mechanics. But for now, Crystal Quest: Arcane Towers is a winner.