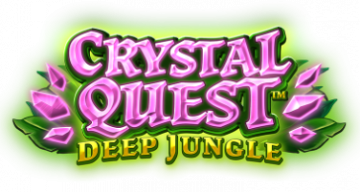 In Crystal Quest: Deep Jungle from Thunderkick the player finds it self deep in the heart of the jungle. As the name of the slot suggests, you are on a fantastic quest with the fearless and heroic Gemma, who guides you along your path as you go in search of crystals and gems.

This is a cascading slot that has six reels with 4 rows, and 4,096 ways to win. There are Exploding Wilds, as well as Infinite Win Multipliers. All of these have the possibility of giving you wins of up to 15,000x your bet. There are also the Free Spins, Tumbling Reels, Wild Symbols, and also Mystery Symbols. This is a high volatility slot, with an RTP of 96.14%, which is not too bad, most players will find this to be an acceptable percentage.

Crystal Quest is a likable title, it has a somewhat a cartoon design, but quite enjoyable to play. Most of the symbols in this game come in the form of crystals and gems. These are all of various shapes and colors. The emerald green jungle theme has a refreshing look and feels to it, with its abundant leaves and vines that are creeping their way across the stone blocks.

When this feature is activated, an avalanche of symbols will tumble down into the playing grid. Winning combinations disappear to be replaced with new symbols that fall into their place. This avalanche of symbols continues until there are no new winning combinations. While the Avalanche feature is activated, the progressive multiplier will increase by x1 on every winning spin. This will happen endlessly until there are no new wins.

The Mystery Symbols are represented by glowing purple gems, it can appear anywhere on the grid. They transform into the same symbol which is randomly chosen allowing for easier combinations that win. They cannot be transformed into wild or scatter symbols.

The scatter symbol is displayed by a golden chest. You will be awarded a certain amount of spins depending on the amount of scatters you land on the reel at the same time. These can land at any place of the reel, unlike regular paying symbols that have to land from left to right on the reels.

Crystal Quest: Deep jungle has all the right ingredients to provide some excellent entertainment. There are enough decent features. Especially the progressive multiplier which is present in the base and also the bonus game, this is not often seen in most slots games. And lastly, the opportunity to win the 15,000x the stake, makes this a title that deserves to be played.