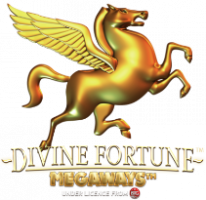 The acquisition of Red Tiger Gaming granted NetEnt the license to use the Megaways engine. Then of course NetEnt did Divine Fortune. A old Jackpot slot that is working nice with Megaways.

Divine Fortune Megaways is the sequel to the original slot game which NetEnt released late back in 2017. The earlier version of this game had two fixed jackpots, and also an awesome progressive jackpot that had the potential of amassing up to six-digit numbers. Unfortunately, this is not the case with the new Megaways version. The progressive jackpot is now gone and has been replaced by 3 fixed prizes in its place.

The game has six reels, with each of these reels holding between two to seven symbols. Seven icons are needed in each reel to unlock the 117,649 win ways. Matching symbols that are landed in neighboring reels starting from the first reel form wins.

The theme for Divine Fortune Megaways is also quite similar to the original version, consisting of mythological creatures from the ancient Greek culture. Visually speaking the game has quite an appealing look to it, the reels, symbols, and the background all have a nice shiny silky polished appearance.

Divine Fortune Megaways can be played on all devices ranging from desktop computers to mobile devices. However, on mobile devices that have smaller screens, it can get a bit difficult to play due to all the clutter. The graphics are excellent on the mobile versions, with nice vivid visuals, and superb animations.

The RTP is now a bit lower, whereas it had an RTP of 96.56% in the original version of the game, the megaways version has an RTP of 96.06%. Not much to worry about though, as it’s still a decent percentage. The volatility is medium, which provides a chance for frequent wins.

This feature activates when four or more scatter symbols land at any place on the reels while playing the main game.

NetEnt had their success with Divine Fortune as a Jackpot slot. I have to be honest and say this is one of the best Megaways slots out there. If you are a fan of the game for sure you will like it but it isn´t more to that