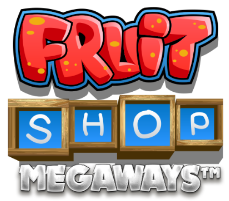 The original Fruit Shop was an instant hit back when NetEnt released it in 2011. And it’s been many years since this fantastic fun game appeared in casinos all over the world. So, we have some good news and are proud to announce that Fruit Shop has had its Megaways upgrade done and making a new & improved return.

The original game was well known for its basic straight-forward gaming. However, the Megaways version should have a lot more to offer. While the original Fruit Shop was designed with the casual player in mind, having a higher RTP of 96.71%, with smaller wins that were more frequent. All of that has been changed and this Megaways version will in all likelihood be better suited to the veteran player that enjoys higher volatility, and much bigger wins.

Fruit Shop Megaways uses the typical setup for this engine of 6 reels and an upper ceiling of 117,649 Megaways. While it’s not too easy to land big wins, the large jackpot of 20,000x compared to the original game that only had 2,000x makes it all worth playing. The RTP is also slightly lower than the original slot and is 96.06%, compared to 96.17% of the original game.

Fruit Shop Megaways – What you need to know

Fruit Shop Megaways seems to be more suited for the veteran player as far volatility goes, but at the same time will suit the novice player who seeks something a bit more than playing straight forward simple retro slots. As far as the seasoned Megaways players go, this slot does not offer enough in terms of features.

The reels are set within a fruit shop that sits set in the middle of a field with lavish forests in the background. The game has an upbeat and fun feel to it. Low-paying symbols consist of royals 10, J, Q, K, and A, while an assortment of fruit which consists of oranges, lemons, watermelons, plums, and cherries make up the high-paying symbols. The cherry symbol pays the highest giving the player 1, 2, 3, 4, 5, or 12.5x the total stake for 2, 3, 4, 5, or 6 landed in combination. The wild symbol is the Fruit Shop logo and it can appear on reels 2, 3, 4, and 5. As usual, the wild symbol substitutes for all other symbols and helps to form winning combinations.

Fruit Shop Megaways makes use of a random reel modifier that varies the symbol height on each reel with every spin. This causes the number of ways you win to change each time you hit spin, adding to the game experience, whilst giving players a chance to land spectacular wins.

In terms of gameplay, Fruit Shop Megaways is quite simple. There are no mystery symbols, cascading reels, or any of the other extras that are usually found in Megaways slot games. With this game, it’s all about the Free Spins feature. Which, thankfully, gets triggered quite often. The key to success with this game is to land as many successive big wins as you can while in the free spins mode to get the multiplier up to 10x.

NetEnt has changed the way players activate the free spins. Instead of the usual scatters, players need to land winning combinations of fruit symbols. Winning combinations landed that have between 3 to 6 symbols will be rewarded with 2 to 5 free spins. Plus an extra spin awarded for every Cherries combination landed forming wins with 2 or more symbols.

Fruit Shop Megaways is a decent game to play, it has a different type of gameplay, gone are the cascading reels, mystery symbols, or any other extras you’ll normally find with Megaways slot games. This game focuses mainly on the free spins feature, so if you are a hardcore Megaways fan. Perhaps it better to look elsewhere as it’s possible you will not enjoy this particular title.