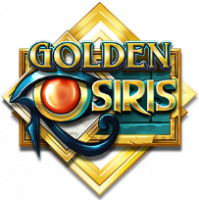 Play’n GO has created an amazing video slot when it comes to Golden Osiris, It fills you with awe the first time you get to lay eyes on it. Visually, this title comes close to perfection, and as far as the features go, this online video slot game ranks right up there with the best of them. It has been a while since Play’n GO release a grid slot.

This is an Egyptian-themed slot and this is the first time Play’n GO has featured a slot in this theme. There are plenty of exciting features to be found in this game, including Cascading Reels, Free Spins, and Pyramid Charger Feature.

The game is based around the legend of Osiris having godly powers in which he can turn golden sun rays into actual gold. As far as the legend goes, it says that Osiris turned light into blocks of gold. These blocks were hidden ages ago and were covered during the time of the building of the great monument. Now you have the chance to uncover the secrets of Osiris and lay claim to his hidden treasures.

Golden Osiris – What you need to know

Play’n Go is well known for being leaders in the video slot department, and with Golden Osiris, they have managed to create something quite awe-inspiring. The pace of the game is excellent, and everything works together in perfect harmony to keep your cascades going. When the going is good you will witness massive chain-reaction build-ups leading to fantastic payouts of up to 12,000x your stake.

Bets can be placed between 10 and 100 per spin, which is quite a decent betting range. Overall the game has an excellent math model except for the customizable RTP ranges. The volatility is high, but not brutally so, and all the features help to keep your winning streak going strong.

This is an Egyptian-themed slot based on the legend of Osiris, an Egyptian God of the Underworld. The game features excellent high-quality graphics and is well designed, with all the symbols perfectly fitting in with the theme. Overall, the Golden Osiris slot is visually a pleasure to look at. In addition to this, a soundtrack has been chosen that complements the whole Egyptian theme.

There are 9 symbols available to form clusters with. The 4 low-paying symbols are consist of gems colored in red, yellow, blue, and green. Next up, we have the 5 high-paying symbols that are represented by cats, birds, scarabs, jackals, and Ankhs.

One thing is for sure, Play’n Go has packed this title full of exciting features. The Cascading Wins feature is activated on landing winning spins, removing the symbols that have won. This allows new symbols to drop in from above, with the process repeating as long as you keep on winning.

Symbols that have been removed will sometimes reveal a wild that is hidden underneath, these wilds can come with multiplier values attached to them in this case 2x, 3x, 4x, 5x, 7x, or 10x.

On the right-hand side of the screen, there is a pyramid that consists of 25 mini-pyramids. Each symbol that is included in a win will charge 1 of the mini-pyramids, so a fully charged pyramid requires 25 winning symbols. The pyramid, however, will reset between spins, so you must fill it within one cascading session.

Once you have fully charged the pyramid, it will open to reveal a symbol that is randomly selected from the grid. All instances of this symbol will then clone an adjacent symbol and match itself causing a new win calculation. It is then possible to recharge the pyramid if you manage to fill it up again.

Recharging the pyramid will give you a new symbol expansion as before, but this time there will be a multiplier of 3x applied to it. Retriggering of the pyramid feature is possible to get +3 added to the multiplier boost, and this is possible up to 30x.

You will be awarded 5 free spins for landing a minimum of 3 Eye of Horus scatters anywhere on the reels. While this might not seem like much, you should keep in mind that you will get a fully charged Pyramid on each spin while in the bonus round. Moreover, only premium symbols will be chosen by the Pyramid to expand, plus you can reactivate the bonus round indefinitely.

Whenever you land 2 scatters on the grid, you will get the chance to benefit from a second chance, this comes in the form of all the surrounding symbols been destroyed, and new symbols dropping in from above. This could lead to a big win, and it also could help you in activating the bonus round if a 3 scatter lands.

In conclusion, Golden Osiris offers four excellent bonus features. This includes the Pyramid Charger feature as well as the Hidden Wilds feature which is not found in many slots. What’s more, the Golden Osiris slot has an average RTP and also the potential to give fantastic huge winnings of up to 12,000x the stake. So, if you are a fan of Egyptian-themed slots, or just want a new excellent slot to try out. You should give Golden Osiris a try.