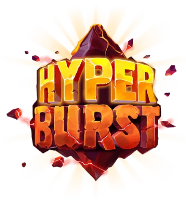 Hyper Burst slot is a thrilling slot from Yggdrasil Gaming. It is set on a tropical island where the volcano is the center focus, bursting with an abundance of riches. The slot has a Polynesian theme that gives it a very ancient and exciting atmosphere. This game feature respins with merging reels with every win, if they last for long enough they can trigger the Hyper Mode, which means you can win multipliers that reach up to 10x.

Colorful and luminous symbols with the intense rumbling of the volcano ensure that the Hyper Burst slot machine appears superb and dazzling on both desktop and mobile platforms alike at the top casinos. Just akin to a real volcano, it is highly volatile, yet with the correct blend of symbols and multipliers, you can win an immense 12,800x your stake from the game.

The stake levels are quite broad since the minimum stake is €0.10 and the maximum is €100 per spin. Hyper Burst can also be played on any device. There is also an autoplay feature that allows you to pick up to 1,000 auto-spins, or an infinity option if you wanted.

The slot has quite an unorthodox layout, but it functions completely flawlessly. It utilizes 6×4 reels to host 25 active lines. It’s worth mentioning the slot has an RTP of 96.02, which is quite high.

In the settings, you can choose to decrease the audio level, or mute the audio completely. There are also options to decrease or increase the spin speed. You can also stop the autoplay feature on any win if your increases/decreases or when the Hyper Mode feature is active.

The Hyper Respins feature is activated by acquiring a winning combination. 2 of the 4 center reels then will merge into one enormous lava reel displaying the same symbols. Each successive win will activate another respin and make the enormous lava real grow further in size.

When the enormous lava reel gets to the largest size of 4×4, then the Hyper Mode feature is activated. When you begin you will have a 2x multiplier.

If you keep winning consecutively you’ll be rewarded with another respin and the multiplier will increase. It can increase up until 10x. So you’d go 2x, 3x, 5x, and then finally 10x multiplier.

The wild symbol will replace all of the other symbols, thereby creating a win.

Hyper Burst is a fairly simple game, yet still impressive. It exclusively focuses on consecutive wins with the respins increasing the size of the enormous reel. It is worth mentioning that the slot is quite volatile but fear not with some luck you can have some superb pay-outs which are well worth it in the end. It’s undebatable that the highest pay-outs will be in the Hyper Mode feature. I think that a lot of people will find enjoyment in this slot.