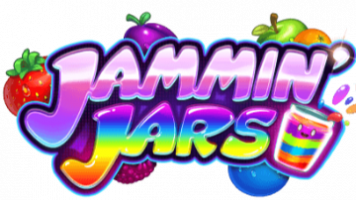 Push Gaming has brought us another great slot machine release by the name of Jammin’ Jars. Having 8 reels and 8 rows, one could be forgiven if you thought the game was a candy crush arcade game. Make no mistake, Jammin’ Jars is a sophisticated high variance slot game that incorporates cascading symbols, wilds, along with multipliers and free spins.

Jammin Jars is a cluster pays game and has a high RTP as well as volatility, so an eventual big win is almost inevitable. This game has a rather fun and exciting disco theme, with fruits and jam jar symbols that appear on the grid. The music also adds to the overall disco theme and is fun and vibrant sounding. Graphics are clear and crisp, and the attention to the detail on the symbols as well as the animation are both very well done.

There are no paylines in this slot game. You win by landing clusters of 5 or more adjoining symbols. Jammin’ Jars has only one special symbol, and that is the Jam Jar Symbol. This symbol serves as both the wild symbol and also the scatter symbol. If you land a winning cluster, and it has a Jammin’ Jar symbol within that cluster, then it remains on the reels. It will also add a 1x multiplier on every spin while the symbol is on the reel. Every winning symbol will be removed on each spin after that, with new ones falling in to take its place. This makes it a possibility of having many wins on just one spin.

In Jammin Jars the wild feature appears at random and is a substitute for any other regular symbol. It has a minimum multiplier value that is 1x your bet. Forming a cluster win that has a Jam Jar Wild within it will turn it into a sticky wild that remains on the grid and will move up to an empty spot at random where there are winning symbols that were shattered. Each collapse of the grid will result in the Jam Jar Wilds staying until there are no more symbols that match left

The Jammin Jars wild is also a increasing multiplier symbol, having a base value of 1x the bet, which can rise to 5x depending on the cluster win and the symbol instance applicable. A cluster win with a Jam Jar Wild increases the related multiplier by 1x with each collapse on the grid.

If you land a minimum of three jam jar symbols, then this acts as a scatter, and the bonus free spins will be activated. Once this feature is activated it continues to extend its sticky wild contributions to the bonus games as well.

On spins that do not have any winning combinations, one can have the Rainbow Feature activating. This happens at random times, and symbols that end up contorted under a giant fruit are then converted into that symbol, whatever it may be. This will then give you a winning combination.

To activate the free spins bonus, one needs to land at least three Jam Jar Wilds or Scatters. During free spins all jam jars that substitute in a win increase by x1 multiplier, with no limits. It is possible to land a fourth jam jar during free spins.

Having a theoretical RTP of 96.83% and also been highly volatile, Jammin’ Jar is a good choice to play. It is jam-packed with lots of special features. all in all, it’s a highly enjoyable slot to play with the potential to win up to 20 000x your total bet provided you are lucky enough. What makes this slot great is that it’s not all about the free spins feature, as the base game can easily give wins exceeding x1000 your bet unexpectedly.