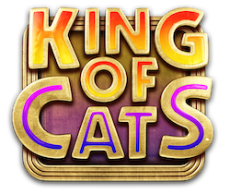 King of Cats
Play For Real

The lion is the undisputed King of Cats but he’s getting a run for his money by the puma in this rare online casino slot by Big Time Gaming. We have all seen the offer of 2 for the price of 1 at some point. This is exactly what’s going on in this game. You could call it 2 slots in 1 since there are 2 different modes and you can switch between the 2 on every spin.

I must say that I was a little confused at first and to some degree I still am. Big Time Gaming could have just made two different slots and it would have been just fine. I suppose this slot is more to do with the game supplier showing off how innovative they can be.

Each mode could seriously have been written as two separate reviews, they are that different, but since they have been crammed into the same slot, I will try my best to explain how each of them work and in the end crown who I think is the King of Cats. But first, there are a few things you ought to know.

King of Cats – What you need to know

Big Time Gaming doesn’t mess around with the RTP in their slots. This means that it doesn’t matter which mode (lion or puma) you play. They are equally volatile and have the same possible payouts. So why should you pick one over the other? I’ll get to that. Here’s what you need to know first.

King of Cats – Theme and background

The lion and puma modes are very different. It’s not just that lion is played during daylight on the savannah while puma is set in the jungle during night-time, there are other small differences as well. What’s most striking is that when you switch between the two modes, you’ll actually get the feeling that they are two different games.

Both modes use the same symbols for payouts and scatters. It’s only the “cat” symbol that’s different because that’s the wild and it behaves very differently too. Especially during free spins but more about that in a bit.

I might as well start with the similarities between the two gameplay modes and then split this section into two sections for the key differences. To begin with, King of Cats is one slot that you can play in two different modes.

It doesn’t change the symbols or the payout structure in the base game regardless of which mode you’re playing. The key differences are when it comes to wilds and free spins.

A lion wild can appear on any spin during the base game and position itself anywhere on the reels, starting from reel 2. The wild can be in three different sizes and win multiplier: 2×2, 3×3, or 4×4 with a 2x, 3x, and 4x win multiplier respectively.

Puma wilds will take up a full reel starting from reel 2 and onwards to reel 5 but you can’t have more than 3 puma wilds on a single spin. Each reel can have a win multiplier of 2x, 3x, or 4x. These can get really exciting, especially when you hit 3 in a row.

It doesn’t matter which mode you’re playing in, you still have to hit at least 3 scatters to trigger the free spins in King of Cats. In that way it’s just like most other online casino slots out there. Once you get there the mode you’re could make a difference.

That just about everything you need to know about the free spins on King of Cats. So, what do I think of this game? What should my final verdict be?

King of Cats – My verdict

If you like this King of Cats review then you should read following: