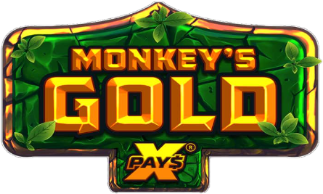 Monkeys Gold is a new slot release from Nolimit City. This slot incorporates their state-of-the-art new xPays mechanics. The game focuses on a Monkey King and takes you deep into the heart of the jungle. Filled with old stone statues perhaps leftover from previous civilizations which have long since died out. So if you are in the mood for an adventure and the chance to win riches, then this game is for you.

The interesting thing here is that Monkey’s Gold xpays differs from most other slots in the fact that it uses Nolimit City’s xPays system instead of paylines. The xPays system seems a lot like the Megaways system, just the number of xPays is fixed with multiplier symbols for bigger wins.

The xPays mechanic system is at the core of this game and has 36 symbols that cascade from the top down into a 6×6 grid. For a player to score they need to land symbols that match and are connected from reels 1 to 3. Winning scatters as well as symbols then drop down to the bottom of the grid, where they remain, while the non-winning symbols are destroyed and new symbols then fall into their place. Any new matching winning symbols will become connected and held at the bottom of the grid until there are no more matching symbols. The total amount of collected symbols will then be multiplied by the value of the symbol, thus giving the player their total score.

There are Random Modifiers that can become available as a spin sequence advances.

This modifier is where a big 2×2 or 3×3 lands on a cascade, and has a 500x multiplier connected to it, and the space beneath a colossal symbol is filled up with wilds.

This modifier adds a multiplier onto the landed symbols. Any wild symbol will inherit a symbol multiplier.

Once a complete row is filled, landed symbols will be upgraded to a higher paying symbol. The highest symbol will get an increased multiplier on that symbol.

The Free Spins feature is activated once 3 or more scatters are landed anywhere on the grid while playing the base game. The player then gets to proceed to the bonus round and starts with 10 spins, to begin with, every extra landing of a scatter adding 3 spins.

Before starting with the free spins the player gets to roll a dice to determine the multiplier which can be 1x,2x,3x. This comes into play whenever a row is filled. The total Free Spins multiplier gets increased by the respective value along with the symbol upgrades.

Nolimits City’s xPays mechanic is a novel new idea and makes for a more interesting payout system. While all of the symbol upgrades, as well as multipliers, keep things exciting as well as entertaining. There is a whole lot of fun to be had while playing Monkeys Gold, and there are some decent jackpots to be won as well. If one is looking for innovative new features and gameplay that offers fantastic wins at the same time. Look no further than Monkey’s Gold.