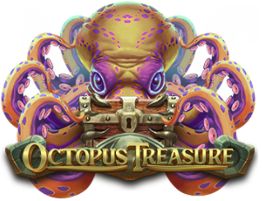 Play’n Go has just released Octopus Treasure, and this online slot looks to be yet another resounding success.

The scene is set deep at the bottom of the ocean floor, where there are sunken ships, treasure chests, and plenty of seaweed as well as marine life moving around in the background. Dominating the screen is a huge octopus moving back and forth in a slow rhythmic motion with long tentacles unlocking treasure chests from time to time for you.

The graphics are crisp and clear, with the animations adding to the overall underwater effect. It’s quite obvious that there has been a lot of effort and planning that has gone into the development of this slot. The icons are appealing, and the background is quite spectacular to the eye. The soundtrack and sound effects are also quite pleasant to listen to while playing the slot.

Play’n Go have a standard game interface, and this is perhaps a good thing as its easy to play their new titles straight away if you are a seasoned player of their titles. There are the bonus features and paytable information which is accessed by pressing the “i” button in the bottom left-hand corner of the screen. This takes you to a sliding menu that explains the information in a clear precise manner.

The hamburger menu allows you to alter the game settings, such as turning on the fast play feature which makes gameplay faster or turning sound on or off using the speaker icon. The space bar can also be set to be used to spin the reels. To change the bet amount there are icons that one can select in the middle of the screen just below the reels.

This is where a player can choose three coins, and they will show which symbols will change into wilds.

The player gets to select a pot that will convert the whole reel into a stacked wild reel. Players can choose more than 1 pot at times.

The octopus helps the player by altering symbols to increase the wins.

The octopus gathers symbols for the player to give an instant prize.

Also worth mentioning is the Key respin bonus round. This feature is triggered by landing the pearl scatter at the same time on reels 1,3 and 5, which unlocks the Treasure Spins feature. The Number of free spins the player receives is decided by the number of keys that the player has collected while playing the respin bonus round.

During each free spin a key is revealed with a spin modifier that applies to that specific spin. These modifiers enhances the chances of the player winning big during free spins. Octopus Treasure has big winning potential when high paying symbols are hit, and a player can win up to 5000x their total bet.

Octopus Treasure is loaded with excellent features while at the same time has that nice clean easy to use interface that one has come to expect from Play’n Go. They have once again impressed us with yet another great video slot and Play’n Go always go that extra mile to provide their fans with lots of entertaining features as well as many chances to win it big!