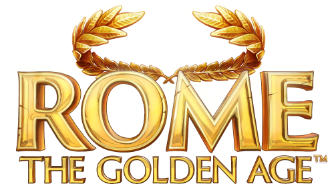 Rome: The Golden Age by Netent

If you looking for a slot with a huge max payout potential similar to Dead or Alive 2 then Roman: The Golden Age slot is for you, as it has 100 000x max winning potentials.

Roman civilization has been essential in the evolution of humankind. It has laid the way and been the foundation for further development in almost all aspects of the development of civilization. With Rome: The Golden Age by NetEnt, we are taken back to a far more prosperous period of a once-great civilization known as The Golden Age of Rome, which was also known as the Pax Romana, or the Roman Peace. It was during this period which began in 27 B.C.E. and lasted until 180 C.E.  That Ancient Rome’s economy, arts, architecture, and commerce flourished. The Roman Empire grew in size and power ultimately became one of the largest empires at the time, with the Roman legal system been expanded to create a uniform system of law. Civil service jobs were created, and a uniform money system was introduced. Overall improvement of the prosperity and stability of the empire was experienced by all.

Rome: The Golden Age – What you need to know

This game doesn’t have a wide variety of bonuses on offer, however, the free spins, multipliers, and framed wilds all combine to provide huge wins. There is potential to win up to 100,000x your stake, unfortunately, the odds are very high against you as far as landing a win this large goes. Plus, you still have to deal with the super-high volatility. However, the promise of life-changing prizes on each and every spin will keep the thrills coming.

Rome: The Golden Age slot is based on Ancient Roman times, and has an Ancient Civilization theme. It’s a beautifully designed game, with marble statues found on either side of the reels. It has an intense soundtrack that could well be from a blockbuster film.

The game’s symbols are made up of the low-paying symbols which consist of 10, J, Q, K, and A royals. Higher-paying symbols consist of Swords, Roman helmets, gold rings, and an Aquila which was also the symbol for the Roman legion. The Tiger is the highest paying symbol giving you 1, 2.5, or 5 x your total stake for landing 3, 4, or 5 in combination. Lastly, there is a wild that can be substituted for all the other mentioned symbols.

Rome: The Golden Age slot features 5 reels and 20 paylines. This slot is unusual in the way that the 5 reels are arranged in a diamond shape, having 3, 4, 5, 4, and 3 symbols on each reel from left to right. It also has frames that become active and award you wilds while at the same time turning adjacent positions into wilds. There are also Golden Age symbols that add points to the progress bar which increases the free spins multiplier by up to 1,000x.

While the Free Spins feature is active, each Rome symbol landed will award you a cash prize with the total being subject to a multiplier up to 1,000x. If you manage to fill all positions, you can double that amount up to 2,000x. Which can give you up to 83,333x stake wins while the feature is active.

Bets range from 0.10 to 50 per spin. The game has a default RTP of 96.06%, which is about average. Volatility is high, while hits come at a frequency of 17.60%. This may seem a bit lower than usual, but the Frame Collection feature helps to balance this out. To hit those big wins, you’ll need to get as high a multiplier as possible before entering free spins, which only normally happens once every 195 spins or so.

The free spins feature plays similar to re-spins features we find in many Pragmatic Play slots such as Wolf Gold, Pirate gold to name a few. So if you like slots with these features, then you would like what the free spins feature has to offer. The only difference is that this slot does not provide a Jackpot prize if you manage to fill the screen with symbols.

To activate the Free Spins feature you need to land 3 Scatters on reels 2, 3, and 4 while playing the base game, or as in the case with this particular game, it’s called the Hold and Win bonus game. The bonus round begins with 3 spins, and all highlighted symbol positions that were landed on the triggering spin will be transformed into coins that have random values of 0.5x to 50x.

While the Free Spins feature is active, only Rome coin symbols can land on the reels and any new symbols that land will become sticky and reset the number of spins back to 3 again. The Free Spins bonus round ends when you have run out of spins or when the entire grid is filled up with Rome symbols. When the bonus round ends, all symbols will reveal random values of 0.5x to 50x, and in the event, you managed to leave no vacant symbol positions, all symbol values will be doubled.

Rome: The Golden Age – My verdict

Visually, this game looks superb. The main aim of the game is to collect Golden Age symbols to build up the Free Spins Multiplier as high as possible. The excellent maximum win potential of 100,000x the stake is quite alluring, however, landing a max win of that amount will be a lot harder than it sounds. We recommend you come fully loaded with a large bankroll.

If you like our Rome: The Golden Age Slot Review, then we recommend you read the following: