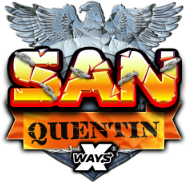 San Quentin State Prison is the theme of this newly released video slot title San Quentin xWays from software provider, Nolimit City. The name San Quentin might be familiar to you as it is one of the most famous and oldest prisons for men in the United States of America, California, and has been featured in many films, books, television shows, and now for the first time in this video slot.

NoLimit City had a very productive successful year in 2020 and seems to be in full stride already for this year coming by releasing this excellent title in the very first month of 2021. Nolimit City is testing the limits as the theme of San Quentin xWays is not the norm, there are parody prison slots that exist, but they don’t have the same kind of realism as this particular title.

San Quentin xWays – what you need to know

The volatility of this game is as extremely brutal as are the inmates you would most probably be running into while in this prison. There will be a lot of smaller payouts landed while playing the base game. As far as the symbols go, the regular symbols are not worth much at all, and you will have to score a massive amount of Jumping Wild multipliers if you hope to benefit during the bonus round. While the 2,000x bonus buy option is a fantastic idea, in reality, there are very few players who will take the option.

The game is set inside the prison yard, here you will see guard towers and loudspeakers just over the gates. While in the bonus round, you get to see the rec area, which consists of just a basketball hoop and concrete walls. There is also a cut-scene that involves a shower room floor, two sets of feet, and a dropped bar of soap. I don’t think we want to know what the outcome might be from that situation. Needless, to say, there is one piece of advice to give in this situation… Don’t pick up the soap!

We find 16 symbols in total in this game, which includes the 5 low-paying symbols that are represented by lighters, handcuffs, toilet rolls, handmade weapons, and a bar of soap. The 5 high-paying symbols are represented by inmates Beefy Dick, Loco Luis, Heinrich 3rd, Biker Bill, and Crazy Joe. There are also regular wilds, xWays symbol, razor split symbol, guard tower bonus scatter, split wild and jumping wilds in addition to the regular symbols.

If you were hoping for a pleasant light-hearted gaming atmosphere, then, perhaps, San Quentin xWays is not for you. This is a hardcore prison-themed game that takes place at a maximum-security prison.

The game features 5-reels with 243 win ways by default, with the number of ways expanding to 46,656 when in the bonus stage. You need 3 or more matching symbols in adjacent reels to land a win, and winning combinations have to start in the first reel and move left to right.

There are two mechanics that we find at the core of the base game, and these are, Split Wilds and Enhancer Cells. Both of these features can allow for massive and even mega wins, with the Split Wild been the more common feature that occurs.

There are also the Razor Split and xWays that come into play.

You can be awarded wins of up to 150,000x. This is most probably the highest potential that we have ever seen in a non-jackpot slot. The game has a default RTP of 96.03%, however, it can be as high as 94.11% depending on the preference of the casino operator. Also, it has a hit frequency that is quite high weighing in at 34.25%, although the straight line win can be quite low, which means you have to rely quite heavily on the game’s extra features to make headway.

The free spins are referred to as the Lockdown Spins, these are triggered when 3 or more guard tower symbols are landed on the reels. Once this happens, you will be awarded 3 extra perks:

It’s quite clear that San Quentin xWays is a great title, while it is quite unforgiving and could even be called brutal. Overall, it has a base game that turns out to be quite well-balanced, allowing for sufficient wins that happen frequently. One must not be misled though, this is a highly volatile game. And at the same time a fun and exciting title to play.