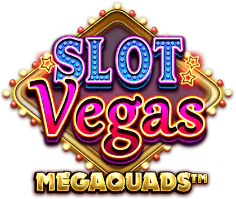 One of the features that stand out in this latest release from Big Time Gaming is the gaming engine that is used. This newly released slot named Slot Vegas makes use of the newly designed game engine – Megaquads. Slot Vegas Megaquads can be extremely confusing when you first begin playing it as it has four separate grids, each with a 4×4 reel set within each grid. It’s like playing 4 separate slot games in one. However, It does not take that long to figure out what is going on, and playing the slot becomes quite easy once you understand the basics behind how the mechanism works.

Here is a quick breakdown of how Slot Vegas Megaquads works. Firstly, the background theme makes you feel like you are in Las Vegas and spin those chips. The base game makes use of four sets of 4×4 reels. Each separate reel set has up to 256 ways for the player to win. This gives you a total of 1,024 ways to win each round. However, if the other features in the game are also helping to raise the win ways, then this figure can go up to amazing 16,777,216 ways that a player can win. Each time you the press spin button, all four reels spin at the same time. Matching symbols landing alongside each other form winning combinations.

The RTP of Slot Vegas is a decent 96.59%, The volatility is quite high though and Free Spins can be quite far apart.

The paytable gives us 6 royals that pay low and 4 that pay high. Lucky seven symbols that come in red, blue, and green make up the high pays. There are four premium symbols which are 0.3x to 1x the stake when you land a four of a kind. Winning grids that combine can give you a value of up to 0.7x to 2x the stake if you land eight of a kind. There are two types of wilds. The first one has been the Standard Wild, and the second is the Rainbow Wild.

The Symbol Multiplier system is the key part of the game, there is a symbol counter that keeps track of all the Symbol Multipliers that occur in the base and also the bonus game. This counter can be found to the left side of the reels.

When you land a four of a kind symbol that is a premium symbol, then the multiplier for that symbol is added on to by x1 and does not reset.

When Rainbow Wilds occur next to each other over 2 reel sets. The Rainbow Wilds bonus then comes into effect. Both reels sets will join together forming one 8 reel grid. This merging of the reel set increases the paylines to an incredible 65,536 win ways, and what’s more, the regular wilds are also added in at random on reels 4 and 5 of the expanded slots.

Free Spins are activated when you land 4 or more VIP scatters at any place on the reels. This gives you 6 free spins, with an extra 3 spins given for each scatters landed above 4.

The Megaquads basic math model that is used must be the most complex ever to have been used in an online slot. It’s enjoyable while admittedly somewhat complex game to play. However, with over 16,777,216 ways to win, and a huge top prize of 45,000x to be won. This will be a very fun and interesting slot to play.